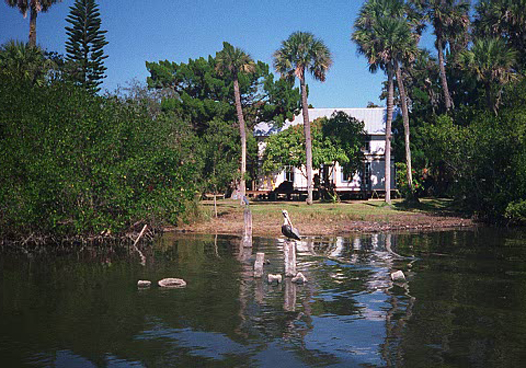 Honest John’s Fish Camp began as a government homestead in 1887. Robert T. Smith and his brother Charley came from southwest Georgia seeking a new life after the ravages of the Civil War. They were farmers and raised beans, sweet potatoes (yams), collards and later citrus. Their produce was shipped to the White House during the presidency of Franklin Delano Roosevelt. Robert bought out his brother’s interest in the homestead, married a Missouri gal named Elizabeth (Bessie) Wells, built a cracker house in 1899 and started raising a family. Honest John was the third child of eight. He disliked farming and became a commercial fisherman. He holds the Honest John’s Fish Camp trout record of 13 lbs. 4 oz. Honest John died in 1994, but his legacy lives on. His daughter, Barbara Smith Arthur holds seven IGFA world records for sea trout and one for black drum. Barbara and her husband, Roger, have three sons who operate the fish camp today.

Honest John’s Fish Camp rents 14′ aluminum boats with a six horsepower outboard motor for fishing. Motor boat rentals include gas, and safety equipment. They rent for $60.00 1/2 day or $90.00 all day. (plus sales tax) Half days are from daylight to noon or noon to five o’clock. Full day is daylight to five o’clock. Reservations are accepted one day in advance without a deposit. Motor boats hold three passengers maximum.

Kayaks may be rented here at Honest John’s for $12.00 per hour or $50.00 all day (plus sales tax). We have a two hour minimum. All boats must be returned by 5:00 pm. but may leave as early as daylight. We have solo & tandem kayaks, sit on tops or sit in. Kayaks are for use in the Mullet Creek/Honest John’s Canals area.

Some fish that may be caught include sea trout, redfish, snook, sheepshead, mangrove snapper and black drum.

Honest John’s Canals offers paddling in a no wake slow speed manatee zone in an area that seems to send you back in time to a Florida most have forgotten.

We have a boat ramp, sell bait and tackle, soda, beer and ice.