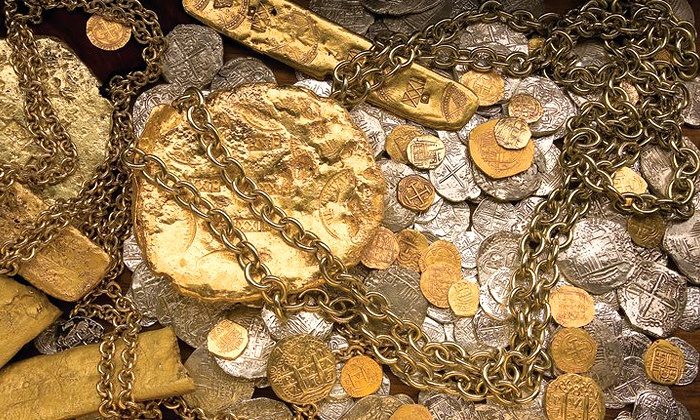 On July 24, 1715, a fleet of eleven Spanish Galleons and one French ship set sail from Havana Spain. All of the Spanish vessels perished in a storm off the east coast of Florida, near present day Sebastian. Seven hundred lives and over 14,000,000 pesos worth of treasure went down.

Another ship, the Atocha, met a similar fate in 1622. On July 20th, 1985, following a 16 year search, a salvage team led by Mel Fisher recovered the mother lode of the Atocha, from it’s nearly 370 year exile on the ocean floor…establishing the greatest discover in treasure salvaging history, both in archaeological and commercial terms. During the search for the Atocha, Fisher and his crew also discovered and raised treasure from the sister ship of the Atocha, The Santa Margarita and an English merchant slave ship, the Henrietta Marie, as well as the 1715 Plate Fleet near Sebastian.

When you enter Mel Fisher’s Treasure Museum you will join the millions who have witnessed the most spectacular collection of Spanish artifacts and treasure ever assembled. You will also be granted the opportunity to watch as the treasure, still being uncovered from the 1715 Fleet, grows in quantity and spectacle in our recent recovery display. Observe on the spot preservation techniques through a special viewing window to our laboratory. Feel the weight of a solid gold bar recovered from the ocean depths. A visit to Mel Fisher’s Treasure Museum affords you the distinct opportunity to own a piece of history, unique gold escudos or silver reales in fine jewelry settings, museum quality reproductions as well as other nautical gifts from our Gift Shop.